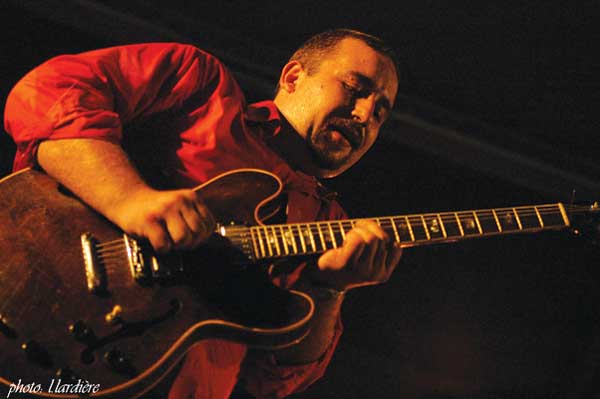 “Josh Miller’s Blues: Anyone who’s spent even the briefest evening in Cocoa Beach is familiar with local Bluesman Josh Miller. They’ve been drawn into local venues by his inimitable sound and dynamic energy, and regardless of previous and conveniently forgotten plans, they manage to close out the night backed by the incredible soundtrack he and his band churn out. There’s just no escaping it. We’ve said it before and we’ll say it again : Miller plays bonafide Blues. The beach scene can be pretty notorious for playing host to under-par “Blues” musicians more inent on channeling a laid-back, cobbled-together sound informed by Buffet and CCR than that of the true, rootbound practioners. The thing that sets Miller apart is his devotion to the long lineage of Blues musicians who smoothed out the gravelly path he trods, and an evening’s performance can play out like an aural history of the Blues’ past, while offering a telescopic view into the genre’s far-off future. Miller’s taken their legacy into his trusted hands, and carries it on delicately like a finely wrought chalice. Tradition is bound up in everything Miller does on stage, yet he pays homage to the greats without mere mimicry. He’s one of the few who’s “got it”, and he doesn’t wield that power irresponsibly. If listening to Miller perform live is a revelation, watching him interact with his instrument and band is nothing short of heavenly. His guitar becomes part of his body and his vocals, raw and impressive as they are, are more akin to casual conversation, so effortlessly do they flow from his healthy lungs. Blues is what he lives and breathes, and his amorphous set-lists play like one long soliloquy. It’s a testament to his skill that any given night can see him leading a different line-up, but who ever he’s backed by, the band is always smoking. Any night is a good night to see Miller and his band – as if you needed us to tell you – so check him out. You won’t regret it. ”
– Tobin Bennison for The Beachside Resident